I have been experimenting with a borrowed iPad for the past few days. It certainly has the ‘wow’ factor, with an exciting look, lightning fast internet and a battery that won’t quit. But there are also quite a few limitations, and things that could be so much better. I have access to the machine for the next couple of weeks, so this is the first in what will be a short series of reviews, but my initial reaction is that I would really like an iPad of my own, but I will wait for iPad 2, or maybe even 3, in the hope that some of these basic flaws can be overcome. 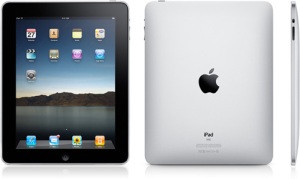 The iPad looks fantastic. It is slim, light, and shiny. Ordinary websites look better on the iPad, and multimedia websites look brilliant (unless they use Adobe Flash, in which case they just don’t work!). The responsive touch screen enables you to easily move within apps (applications) and fairly easily betwen them. Scrolling up and down a page, turning pages by flipping the corner, and zooming in with a brisk double-tap are all very easy to use and quite fun to do.

The keyboard that pops up from the bottom of the screen whenever you need to type is easier to use than I thought it would be. You have to change screens for numbers, and again for some quite common symbols (eg the + sign), and the @ sign seems to move between keyboards depending on the context. This is a bit confusing, especially when typing in passwords and email addresses. The iPad also changes orientation depending on which way up you hold it, but there is a switch on the side to override this if you already know which way is up. The touch screen is very responsive, but only to the touch of a finger. It does not work with a stylus (eg a pen), and the screen gets very grimy very quickly. You need to keep a cloth handy to wipe the screen every now and then.

A major part of my interest in the iPad is to consider how it would be useful in education. I can see many possibilities, but also some problems. It is difficult to share an iPad. To set up the apps an iTunes account is required, and once installed the iPad is tied to that account. The password for the iTunes account is required even for installing free apps, and anyone who has the password can also install the apps that cost money. Until there is a way around this, giving students an iPad in the classroom could open up a range of possible difficulties, basically revolving around the question of whose iTunes account is tied to the device and who has the authority to install new apps. There also does not seem to be any easy way to save files anywhere other than on the iPad, or to print.

The best way to become a billionaire is to invent something that everybody wants that costs less than $5. The apple corporation has done this with their app store. The most expensive apps that I have considered using cost $29.99, but most are only $2.99 or $3.99. Of course, I have not been able to put some of the apps that I want on this machine (because it is borrowed – see the above paragraph), but there are enough free and very cheap apps for most of my everyday needs. I imagine that when I do get my own iPad I will find more and more apps to add to it, making the shareholders of Apple.Inc into billionaires along the way, $2.99 at a time.

In the next couple of weeks I will be testing the iPad further. I will ask my mum, who has limited dexterity following a stroke, to experiment with it. If she can use it to read books and play card games then it will be a great thing and I will talk to the family about buying one for her – and then try to keep it away from her grandchildren. I also plan to try out iPad on a plane, traveling iPad, iPad at a conference, and iPad with Moodle. More to come…